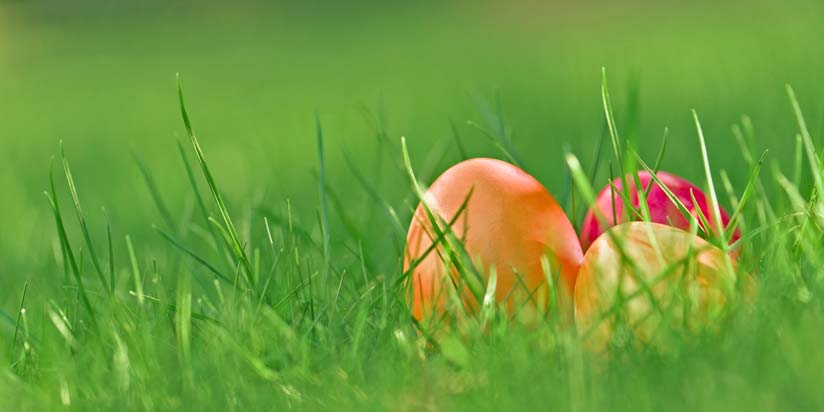 The term “Easter egg” is not only a term used for painted eggs during Easter, but it has come to mean ” a message, image, or feature hidden in software, a video game, a film, or another, usually electronic, medium.”. Originally, it came from bored programmers who sneaked small pranks into computer programs. For example. in the layout program QuarkXPress you could delete an object with the backspace key… but if you also held down a number of obscure keys the following happened: A red alien walked onto the screen with a raygun and fired a laser beam at the object you wanted to erase, until it began to shimmer in different colors and then explode.
In the late 90’s, there were fantastic “Easter eggs” in all the big softwares, everything from secret pictures from the programmers’ office parties to small hidden arcade games.
Today they are not as common, but they still exist… For example on Google. If you go to the start page https://www.google.com and search for Askew, then the whole web page will become skewed.

Or if you search for do a barrel roll, the whole page rotates one full turn.
They often make temporary “Easter eggs” that are linked to current events. Right now, in April 2022, you can search for Gotham City. In the side column, you’ll find a small cartoon Batman signal. If you click on it, a nighttime animation will start, with Batman swinging against the night sky.

You can find more examples at The Easter Egg Archive.

Of course there is an “Easter egg” here at www.tomstone.se too! A built-in magic trick – you do not even have to learn to perform to be able to surprise your friends with a magic trick.

The Drama
As you bring out a deck of playing cards, you say to a friend – “Did you know that the Swedish magician Tom Stone has made a web page about you?”. You write down the URL of the page you are referring to on a note and give it to your friend. Now you let your friend freely cut the deck a few times and look at the card that was cut at and remember it. When your friend now go to the web page you wrote down, the friend not only finds their name there, but also the thought-of playing card!

The work
Like all good magic tricks, this is based on a combination of several different components where the sum becomes greater than the parts. In short, in part, it is a special web page that shows a new playing card every day, and in part, you contribute yourself by “forcing” the correct card – ie. even if your friend experiences it as a completely free choice of playing card, it is really you who control the outcome – which the chosen card will be. Exactly how this is done is described below. But first…

The web page
The website does not really exist. The web page you end up at is actually the 404-error page that you usually end up at when you try to follow links to pages that have been deleted or moved. This error page has been outfitted with some special code that recognizes names. If there is a name in the broken link, in the format firstname.lastname, then the code copies the name from the address field and inserts it in the text of the page.
If your friend’s name is John Johnson, the web URL you’ll write down should be www.tomstone.se/en/john.johnson
The card displayed is always of the Clubs suit, with a value that correspond with the last digit of the current date.
That is; on May 1, the Ace of Clubs is displayed. The Ace is also shown on May 11, 21 and 31.
On the 2, 12 and 22’nd of each month, the Two of Clubs is displayed.
On the 3, 13 and 23’rd of each month, the Three of Clubs is displayed.
…
…

Card Force
“Forcing” is a technical term in magic. It stands for all sorts of strategies and gambits to make a predetermined end result appear as the result of a seemingly free choice. Many of these strategies rely on a rather interesting fallacy. We tend to assume that freedom in action inevitably leads to freedom in outcome, and that is not really how the world actually works.
In this case, you need to force the playing card that, for the day, appears on the web page. You can look up “card force” tutorials on youtube, although they are often quite bad, inaccurate and lack proper crediting. Or use the following.

The author of this illusory sequence is often said to be Ed Balducci (1906-1988), a civil engineer and amateur magician from New York, as it was claimed to be his in the work “The All-fair Coincidence” that was published in Hugard’s Magic Monthly No. 6, Nov. 1956.
But in 2008, the magician Karl Fulves discovered that the sequence had an almost identical predecessor ten years earlier, in Sam Mayer’s work ”Another Do as I Do” from Sphinx No. 5, July 1946. Read the article at Conjuring Credits if you want to know more! 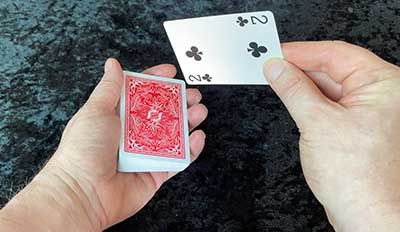 Start by secretly placing the correct playing card at the top of the deck. For example, if the date is April 22, then Two of Clubs is the card of the day. 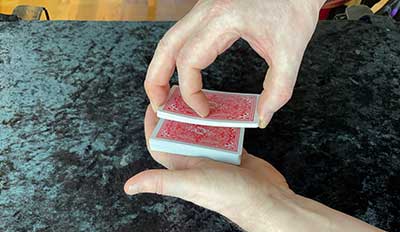 Give the deck to your friend, and ask them to cut off any amount of cards, but less than half of the pack. If necessary, show with pantomime. Your friend does this.

As soon as your friend has lifted off a number of cards, ask the friend to turn them over face up and then put them back on the deck, still face up. 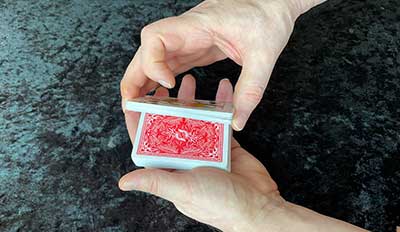 Ask your friend to repeat the procedure, but cut deeper into the deck – ie. lift off more cards than last time. Your friend does so, as shown in the picture here. 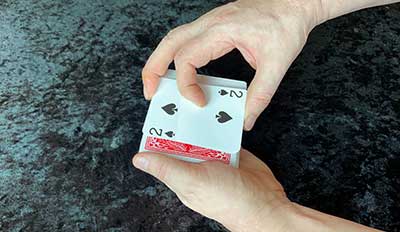 As before, ask your friend to rotate the packet of cards 180 ° and put it back on the deck. Completely different faces comes into view, which reinforces the feeling that the choices are free. 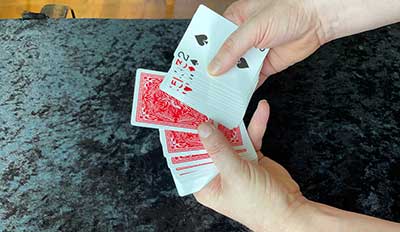 Point out to the friend that since you also can see the face up cards, it’s best if the friend spreads out the cards and instead pick, look at, and remember the first face down card. 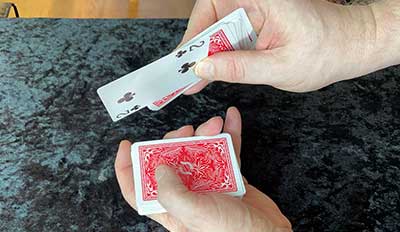 Let’s examine the situation: Your friend have made two fairly free cuts, and will conclude that variation in action leads to variation in outcome. This is the outer reality. The inner reality is the very opposite, because the card your friend looks at and memorizes is the original top card – The card of the day on the website!

Point out that you yourself can not know which card your friend is thinking of. That no one can know. Now let your friend go to the web page you wrote down …

Let’s say the date is October 20, your friend’s name is Clint Eastwood, and the web URL is www.tomstone.se/en/clint.eastwood – your friend will be surprised with the following sight. 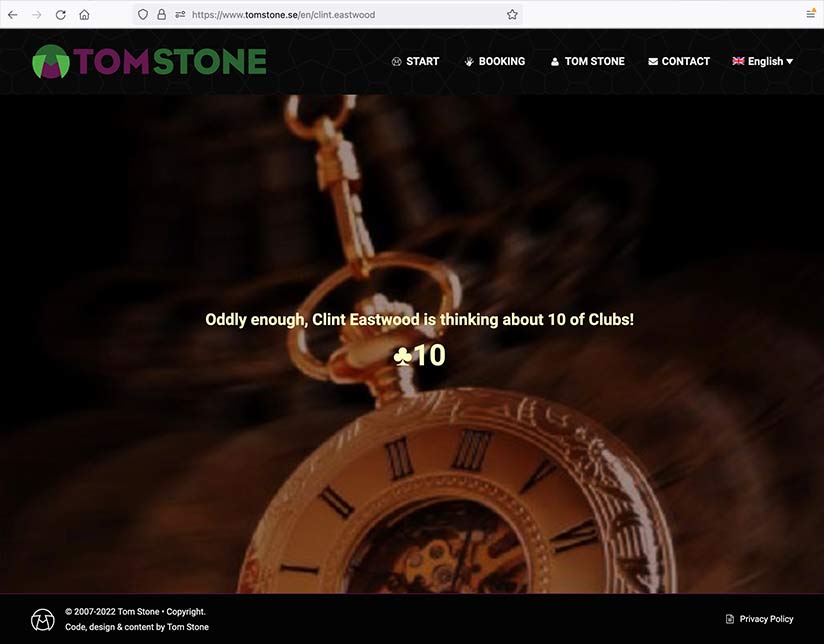 If you don’t mind Swedish text, the URL can be simplified to: www.tomstone.se/firstname.lastname

There’s no advanced programming involved, it is just a mildly glorified 404 error page, so any spelling mistakes in the URL will also be shown on the page itself.

Tom Stone have been a professional magician since 1990. Beside being a performer, he's an author of new magic works, a teacher at advanced courses in magic, and the writer of several books.

This site uses Akismet to reduce spam. Learn how your comment data is processed.