It was back in the year 5 bke (Before the Kaufman Era) when the Genii office received an unsolicited contribution from a young fellow in Sweden. The author had no name value to American readers, but the trick was clever, the write-up was in almost perfect English that required very little editing, and the text was accompanied by clear illustrations. And that is how Tom Stone was introduced to the non-Scandinavian magic world.

Over the following years, quite a few more Stone tricks appeared in these pages. While the plots and methods were highly eclectic, all of the material maintained the common thread of fine magic, often with an offbeat whimsicality that made the reader think anew about “standard” tricks. Today, that creative streak has continued, including some published pamphlets, a series of e-books, and now—at long last—a full-sized book. 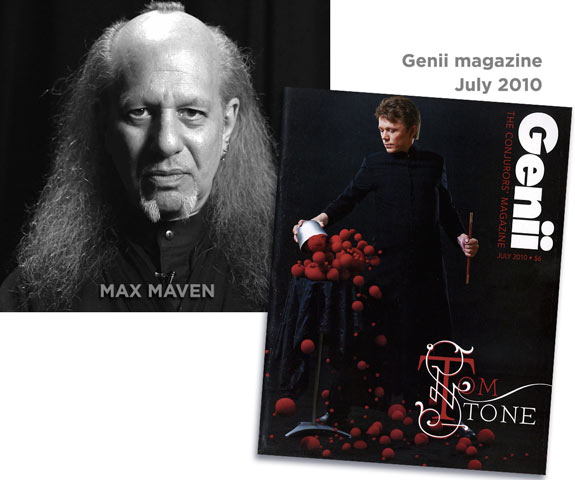 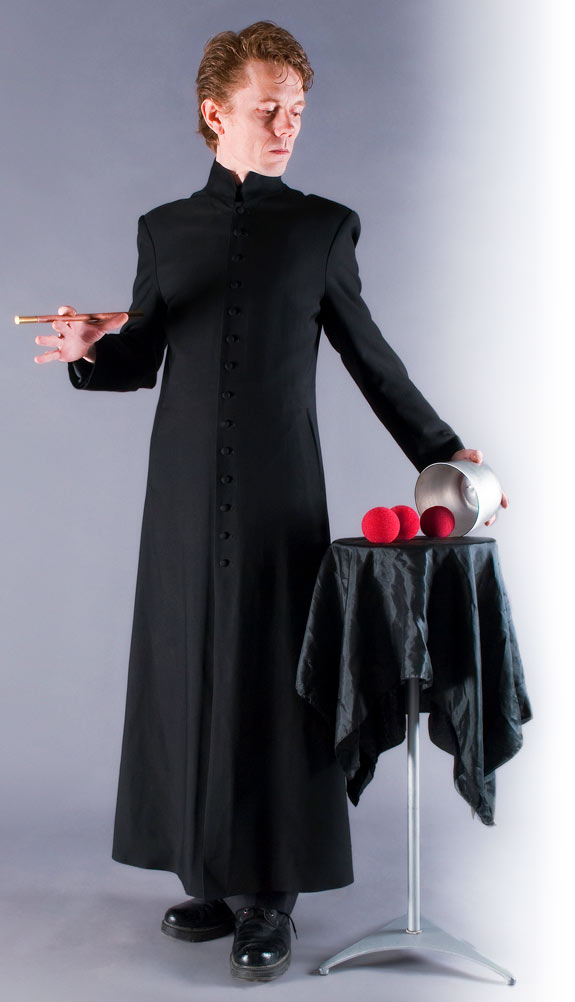 So how did this innovative dervish develop? The story begins in 1967, when Tom was born; the first of seven children in a family of farmers located on the west coast of Sweden. The closest town of any size was Uddevalla, almost forty miles north. Hence, when it came to hobbies and recreation, the young lad was left to his own devices. 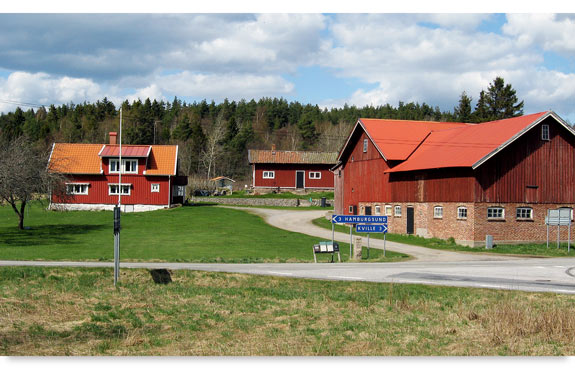 He describes his parents’ library as “not big, but very diverse, from books on how to build electric motors to Henry Miller’s literature, from the bible to agricultural manuals. By the time he was thirteen, Tom had read everything at least once. Reading not only served to nurture his insatiable curiosity; it also allowed him to shut out some ongoing family problems. When he was seven, his parents divorced.

During the following year he came upon a book that had been published in 1958, Nu ska vi leka (“Time to Play”). In addition to stunts and games, the book had two chapters on conjuring. Tom recalls that the illustrations for those chapters seemed older in style than those in the rest of the book. He now guesses that the editors simply nicked material from Hoffmann or some similar old source.

Among the parlour tricks was the gambit of borrowing a small item, covering it with a handkerchief, letting several spectators feel that the object was still there, then vanishing it. You probably remember this from one of your first books on magic: The method was that the last spectator to feel the item was actually a confederate, who would steal away the object to enable you to subsequently cause it to disappear. Tom notes: “I could not quite figure out how I was supposed to manage an effect like that, on a farm in the middle of nowhere, with an audience of two (not counting cows): my father and my two-year-old sister. I quickly decided that the stooge method wasn’t for me.”

He considered performing magic at school, but felt much too shy to do so. Plus, there were other areas to investigate that did not require as many social skills. His father carved wooden sculptures, spun pottery, experimented with film animation, and much more. The man may have been intimidating, demanding and cold, but he placed Tom in context of constant exploration.

Then, in 1981, his father drove him to a nearby village to see a two-hour Folkets Hus (“Folk House”) show by Topper Martyn. Most Genii readers will remember Topper, a popular favorite at international magic conventions for decades, who had much success in the real world, performing in circuses, nightclubs, theaters and even on ice, combining magic, juggling and manic comedy.

Tom says that the show “was a huge eye-opener for me. It was my first experience ever where I felt that ‘anything is possible,’ and it hinted that life didn’t have to be so glum as I had come to believe.” After the show, Tom went around to the stage door to meet the performer. Topper asked, “Do you do magic, too?” Tom meekly replied that he did. Topper warmly said, “Keep it up!” Years later, Tom and Topper became good friends. Eventually, he told Topper that he was the reason for his obsession with magic. Topper laughed and teased, “Oh, no—have I destroyed another young man’s life?!” Of course, for Tom it was exactly the opposite.

Buoyed by Topper’s example and encouragement, Tom summoned up the courage to start performing magic for actual audiences. He developed a twenty-minute act, using common articles such as rope and handkerchiefs. The magic itself was not unusual, but it featured personalized patter that made it well received. For his first paid show he got fifty kronor (close to five dollars). 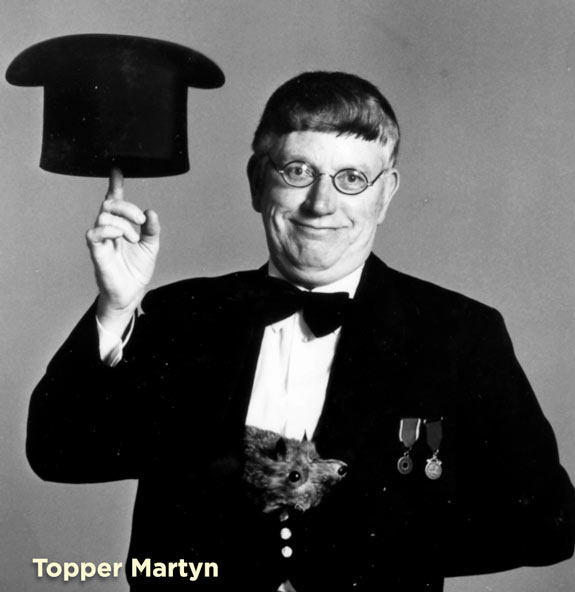 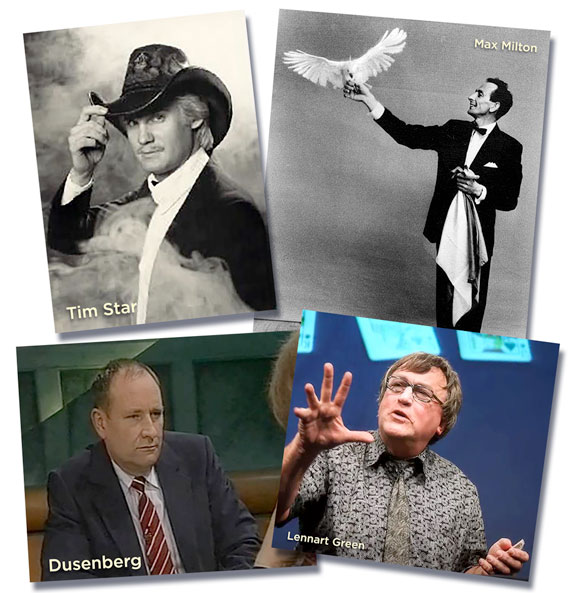 He performed at birthday parties, family events and festivals. It was still an effort to push past his shyness. If a mistake occurred during a show, as soon as the performance was over he would inevitably vomit.

When he was fifteen, he learned of the existence of magic clubs, and that there was such a Magiska Klubb in Göteborg, Sweden’s second-largest city and one that he could access by train. He attended his first meeting, which “seemed like a dream.” The feature that night was a lecture by Tim Star, plus he got to see a number of prominent magicians perform—some of whom would later become good friends and role models, such as Max Milton, Dusenberg and Lennart Green. He applied to join. At the next meeting, he had to pass an audition. His personalized routining made a good impression, and he was accepted for membership.

At sixteen, Tom left the farm and moved Uddevalla, to study engineering. After three and a half years, he switched over to graphic design, which he studied for an additional two years. Upon completing school, he tried to find design work. However, the Swedish economy was in a slump, so he scuffled for months with little success. He found part-time work as a substitute teacher, and as an orderly in a psychiatric ward; clearly, these were not his career goals. What meager income he managed to generate came mostly from magic shows. After a year of this, it dawned on him that he had become a professional magician!

It was during his time in Uddevalla that Tom’s creativity began to really blossom. He started inventing magic, for a simple and pragmatic reason: He was curious about the process, and decided to learn by doing. It soon became obvious that he had a knack for this type of thinking.

He continued his involvement with the magic club. The organization had a magazine, Tricks. When its editor went into the hospital, Tom was asked to fill in for the interim. The editor never made it out of the hospital, so Tom’s temporary editorial role continued for the next eight years.

He joined an amateur theater company, Studio32, acting in a production of Happy End by Berthold Brecht. This was a collaborative effort, and he found the process stimulating. As a result, he began to write theater scripts of his own. At first, these were short skits, but by 1990 he directed a self-penned two-act play, essentially a Sherlock Holmes spoof, with a cast of eight. The show got quite a bit of attention in the local press. 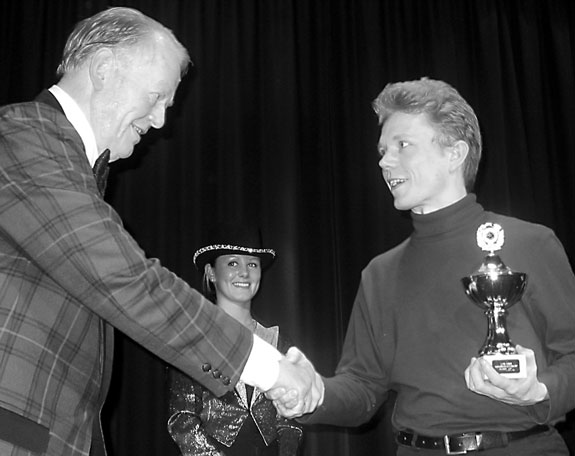 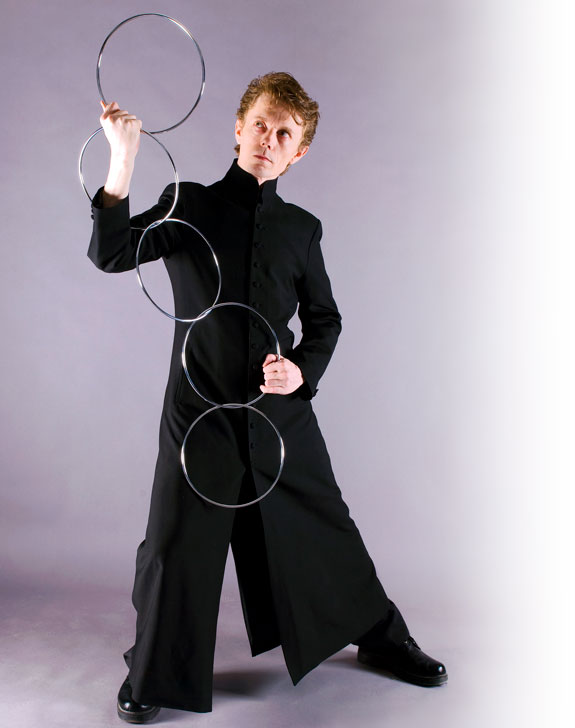 At this point, now in his early twenties, he moved to Göteborg. He did every type of show he could find or promote, and began building a reputation. His efforts began to produce results: In 1992, he won first prize in the Swedish National Convention contest. He also released a manuscript, The Ambivalent Travelers (which, despite its English title, was written in Swedish). He also started sending contributions to Genii. 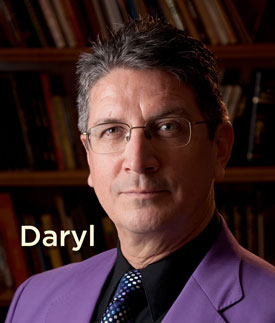 When Daryl came to lecture in Göteborg in 1992, Tom spent two days in his company.
He recalls, “I was curious about his marvelous Cardboard Chameleons, so I was very happy when he agreed to talk about his thinking and reasoning that led up to the creation of the piece.
I believe this was the first time I had the opportunity to discuss the creative process with a known creator. It was very instructive.”

After Tom showed him some of his own devisings, Daryl urged him to publish more. “I was quite surprised,” says Tom, “because I didn’t think my ideas had much merit. But it was clear that he didn’t encourage me just to be polite!”
This, along with the response to his items in Genii, led to the release of his first English-language booklet, The Warpsmith’s Toolbox, which increased international awareness of his work.

In 1995 he started the Dr. Faustus Journal, an intermittent magazine that had ten issues over the next five years. It was aesthetically and intellectually successful, but financially not.

At one of El Duco’s annual conventions in Lund, Tom met Peter Rosenberg, a clever cardman from Malmö, Sweden’s third-largest city. In 1996, Tom decided to relocate to Malmö, and moved into Peter’s spare bedroom. (This was news to Peter’s wife…) He stayed for three weeks, until he found a place of his own.

They developed a 75-minute show, entitled Close-Up, which was presented twice a week in a small 45-seat theater, for a three-month run. Over the ensuing decade, other collaborative magic shows would follow with an assortment of participants. For instance, in 2003, Och Ett Piano (“And a Piano”) and Bakom Dimridån (“Behind the Curtain of Fog”). In 2005, Mjuka Män & Hårda Hattar (roughly, “Mellow Men & Hard Hats”). These were longer, more ambitious works, mounted in theaters of up to 250 seats.

This was a busy and productive period. In 1999, he was invited to Japan to perform and lecture for one of Ton Onosaka’s conventions. That it went well is evidenced by the fact that since then he’s been brought back to Japan twice. In 2000 he attended and performed at his first FISM, in Lisbon. That same year he moved to Stockholm, the largest city in Sweden.

In 2001, Tom and Peter gained employment doing magic on cruise ships that ran between Sweden and Finland. This led to another show called Lost at Sea. Also that year, he came to the U.S. for the first time, and did a week in the Close-Up Gallery at the Magic Castle. This was a fine success; booker Ron Wilson promptly arranged for him to come back less than a year later, this time to do two weeks. 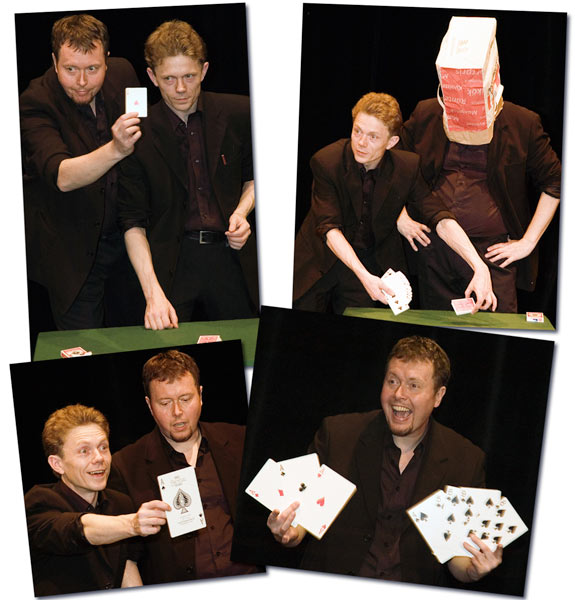 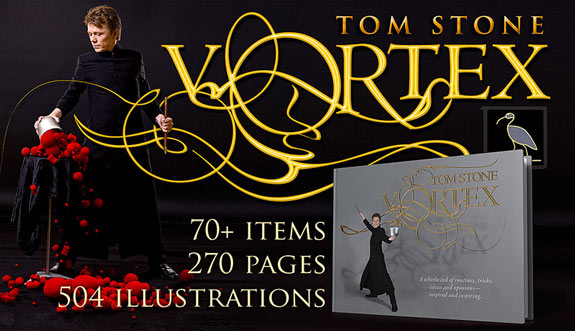 And so it has continued. Tom has maintained a substantial output of material, much of it in the form of best-selling e-books.

Meanwhile, back in 1993, renowned author/publisher Stephen Minch, impressed by the Warpsmith booklet, began discussing with Tom the possibility of doing a larger book. And now, a mere seventeen years later, that project has been completed.

Tom Stone continues to exercise his creative passion, and he remains one of the freshest and smartest thinkers in the conjuring field. As his work proliferates, his ideas reach more and more people. No doubt, there already magicians who have hints of Tom’s influence in their work. Deservedly, that number will keep on growing for a long time to come.